Lulu – the “archetypal woman, created to wreak havoc, to lure, to seduce, to poison and to murder without anyone realising” – represents the object and the projection of men’s desires and dreams. By destroying her lovers, Lulu is driven from cold-hearted love to cold-blooded murder and ultimately to her own destruction. Alban Berg’s last opera is based on Frank Wedekind’s stage play, which at the time was banned as immoral. As a result of Berg’s sudden death in 1935, the opera remained a fragment and has now been completed by David Robert Coleman, who was commissioned by the Berlin State Opera Unter den Linden to elaborate on Berg’s sketches. After adding a number of jazz instruments, he has created a new “Berlin version” premiered at Berlin’s Schiller Theatre and directed by Andrea Breth. In a disturbing series of sets the director approaches the mythical core of the work and portrays psychologically precise, cruel events, frightening and full of mystery, all framed by Lulu’s death wail at the beginning and end of the work. Mojca Erdmann as Lulu proves ideally suited to this interpretational approach. In a skimpy silver lamé dress she appears an innocent angel; young, cold, more of a mermaid than a shrew as she masters the insane leaps and coloraturas of the role with incredible ease, hitting the barely singable high notes with incredible accuracy. She is ably supported by the wonderful, physically impressive Deborah Polaski as Countess Geschwitz, the “internally smouldering” Michael Volle as Dr Schön and Georg Nigl as the “meticulously articulating athlete”. (Der Tagesspiegel) Daniel Barenboim and the orchestra of the Berlin Staatskapelle give a finely calibrated reading by “turning the emotional aspects inside out, precisely portraying the nuances of the work, all in such an alert, fiery and thorough fashion in their chamber-ensemble music-making that at the end of it all one can only feel a sense of enthusiastic amazement.” (Märkische Allgemeine) 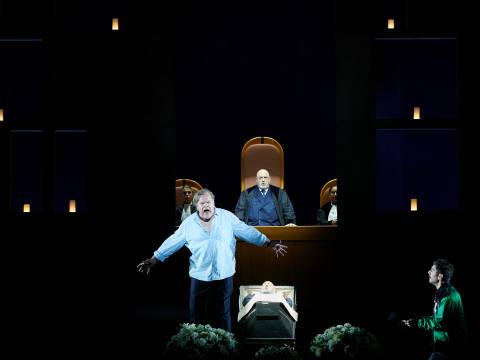 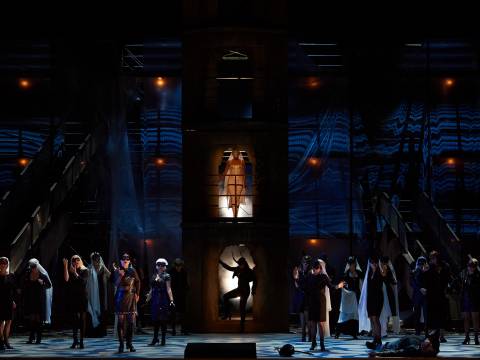