“A completely gripping new production” (Frankfurter Allgemeine Zeitung): 52 years after their premiere, Hans Werner Henze’s The Bassarids return, with Kent Nagano at the helm, to the Salzburg Festival for a rare revival of this modern classic in a highly dramatic psychological staging by Krzysztof Warlikowski. The opera, inspired by Euripides’ tragedy The Bacchae, is as seductive as it is topical: When Dionysus – is he a charlatan? is he a demigod? – bursts into the intact world of ancient Thebes, he plunges a city into chaos. In stark contrast to his cousin, King Pentheus, who leads a life marked by purity and asceticism, Dionysus preaches intoxicating excess and sensuality. This personified battle between the rational and civilized side and the instinctive, purely sensual side of human nature leads the royal family into disaster. Aware of the story’s political dimension that resonates in present day politics, Krzysztof Warlikowski brings one of his famed psychological stagings to the Felsenreitschule in Salzburg. In the gigantic three-part set of Małgorzata Szczęśniak the captivating tale unfolds like a film using split-screen techniques. With “an ensemble that without exception has an outstanding cast”, the musical realization is “simply sublime” (Der Standard). The young US tenor Sean Panikkar excels with displays of effortless heroic power as Dionysus - “a triumph” (BR Klassik). His opponent Pentheus is excellently sung by Russel Braun with carved diction and vocal focus. How Tanja Ariane Baumgartner and Vera-Lotte Bäcker portray Agave and Autonoe is “an art of singing and playing of the highest order” (Neue Zürcher Zeitung). Willard White’s Cadmus convinces with his strong personality. The Konzertvereinigung Wiener Staatsopernchor are the “overwhelming protagonists of this new production” (Süddeutsche Zeitung). Star conductor Kent Nagano, who was close to Henze, includes “The Judgment of Calliope” in the festival Bassarids, a 20-minute section included in the original score, which adds a new dimension to the opera’s presentation of the Dionysian cult. Henze’s score manages a rare balance of experimental and traditional effects. By combining the best of both worlds, the world of the post-World War II avantgarde and the world of the Romantic, it develops an irresistible pulling power. Nagano leads the Wiener Philharmoniker with clarity and precision, ensuring transparency even with the largest orchestra volume. “A magical moment“ (BR Klassik) and “a resounding success for the festival” (Die Deutsche Bühne). 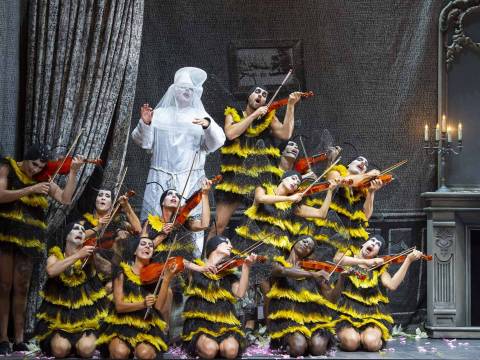