Jonas Kaufmann and Anja Harteros, the dream team of opera, continue their successful collaboration in a new production of Umberto Giordano’s Andrea Chénier at the Bayerische Staatsoper in Munich. Alongside the superb baritone George Petean, the superstars show how love triumphs over death in the shadow of a terrifying regime. In the opulent staging by film director Philipp Stölzl, Marco Armiliato conducts the Bayerisches Staatsorchester. Andrea Chénier, Giordano’s verismo opera, casts light upon the turbulent times of the French Revolution, and doesn’t shy away from its dark side. Embedded in the great historical panorama, which is being laid out before the spectator, are the personal fates of the opera’s protagonists. Star soprano Anja Harteros sings the young aristocrat Maddalena di Coigny, “a role that seems to be tailored to her” (FAZ). When Maddalena loses everything in the upheaval of the revolution and is in grave danger as aristocrat, she turns to the young poet Andrea Chénier for help, who had impressed her with his criticism of the nobility’s mercilessness before. Chénier, sung by star tenor Jonas Kaufmann “with a dark, alluring, longing timbre” (Süddeutsche Zeitung), falls in love with her, but is being arrested and accused of high treason by Carlo Gérard. George Petean is utterly convincing in his role as Chénier’s rival. Now a powerful member of the Revolutionary tribunal, Gérard has been in love with Maddalena since his time as servant for the Coigny family. But when she offers herself in exchange for Chénier’s life, Gérard is moved by her willingness to sacrifice herself and tries everything to free Chénier. Despite his efforts, the poet’s execution is inevitable and in the face of death, Chénier and Maddalena declare their undying love for each other. Fierce and passionate, Harteros’s Maddalena is “a marvel” (Süddeutsche Zeitung) in this fast-paced
narrative. With tableaux vivants, historical costumes and scenic parallelism, stage director and designer Philipp Stölzl provides a powerful, filmic imagery, contrasting the upper classes of society and their lavish feasts with the living conditions of their servants, who are crammed together in the basement. With the joint forces of the Bayerisches Staatsorchester and the Chorus of the Bayerische Staatsoper, conductor Marco Armiliato brings all the drama of revolutionary France to life. “A sensational Anja Harteros brings the house down! Kaufmann is perfect for the role – full of vitality and radiance! Worldclass!” 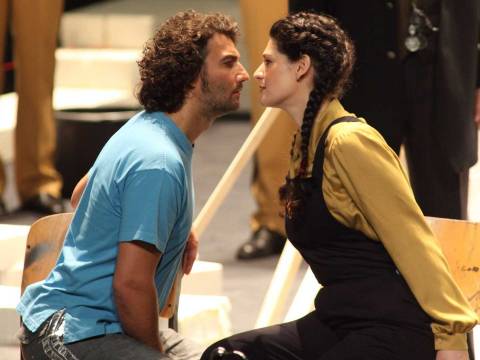