Superstar Anja Harteros excels in the title role of Michael Sturminger’s cinematic staging of Giacomo Puccini’s Tosca, the centrepiece of Salzburg Easter Festival 2018. Aleksandrs Antoņenko compellingly portrays Cavaradossi, while Ludovic Tézier is a thrillingly malevolent Scarpia. Christian Thielemann leads the Staatskapelle Dresden.
Premiered in 1900 with huge success, Puccini’s “melodramma” Tosca is a political thriller with a heart-breaking love story that gives a vivid account of the harassment of artists, political persecution, torture, arbitrary executions and war – with extraordinary attention to detail put on stage at Salzburg Easter Festival. How German star soprano Anja Harteros lays bare Floria Tosca’s heart, how she differentiates the nuances of Tosca’s feelings “is unparalleled in the world” (Der Standard). Effortlessly she makes the transition between coquettish prima donna, a woman consumed by jealousy and a lover tormented by abysmal despair. When the reclining Harteros performs the aria “Vissi d’arte” with touching tenderness, it is the emotional highlight of the night – she is “a phenomenal Tosca!” (Kurier). Aleksandrs Antoņenko is “a Cavaradossi of superlatives” (Kieler Nachrichten), while Ludovic Tézier portrays one of the most fascinating brutal persons in opera history. His Scarpia is an elegant gentleman whose noble demeanour contradicts his diabolical words; Tézier’s multifaceted baritone overwhelms by showing the “beauty of evil” (Augsburger Allgemeine).
A police van in a bleak underground car park, flashing blue lights, gun shots being fired: With his gripping opening scene, stage director Michael Sturminger sets the tone for a cinematic, richly detailed “Tosca” which is set in the Mafiosi world of modern day Rome and which is “the perfect thriller … reminiscent of Scorsese’s ‘Goodfellas’” (Kleine Zeitung), a “film noir” (FAZ). In a chilling plot twist, Cavaradossi is executed by young people from a Catholic boarding school, and Sturminger spectacularly replaces Tosca’s suicide with a Hollywood showdown, in which Scarpia and Tosca kill each other in a dramatic shootout. The impressive sets created by Renate Martin and Andreas Donhauser are extremely splendid replicas of the original locations, such as Sant’Andrea della Valle with its the towering columns or Scarpia’s elegant study at Palazzo Farnese including the monumental frescos of Mannerist painter Francesco Salviati, but interspersed with subtle references to the present day like flickering neon writing or an exercise bike. Ever since Christian Thielemann took over in 2013, the Staatskapelle Dresden is the Easter Festival’s orchestra. The maestro leads his fabulous musicians as well as the combined voices of the Salzburger Bachchor and the Salzburger Festspiele and Theater Kinderchor “with confident craftsmanship … in this gripping, rousing, clearly focused music drama” (Salzburger Nachrichten). “You rarely hear ‘Tosca’ interpreted as lucid, transparent and flexible” (Hamburger Abendblatt), “as work of art of fine polyphony” (FAZ), as in Thielemann’s version at the Salzburg Easter Festival. 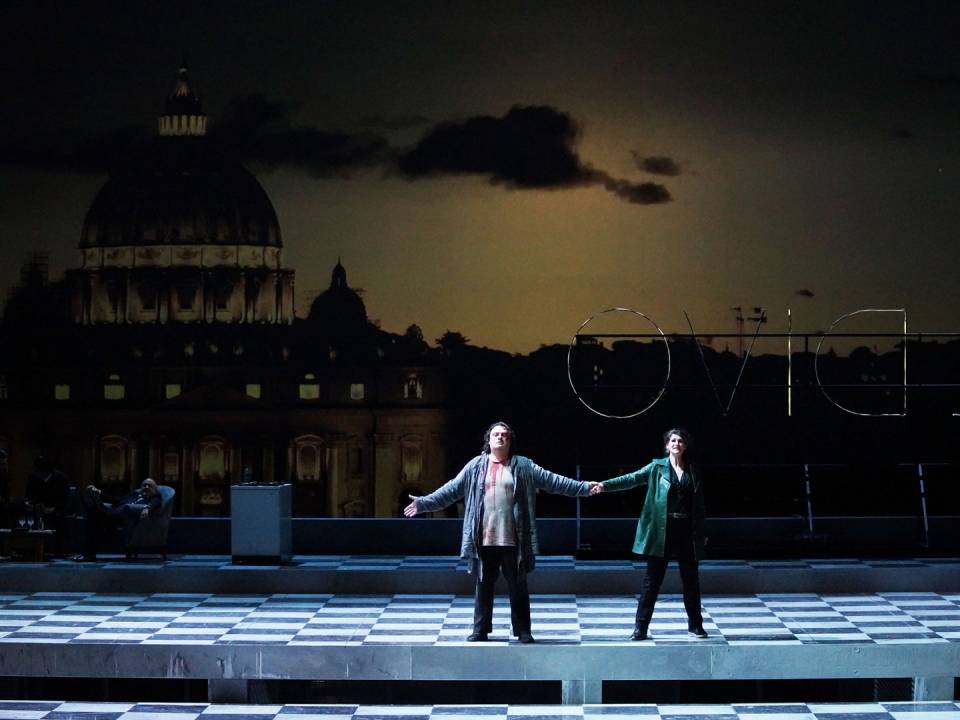 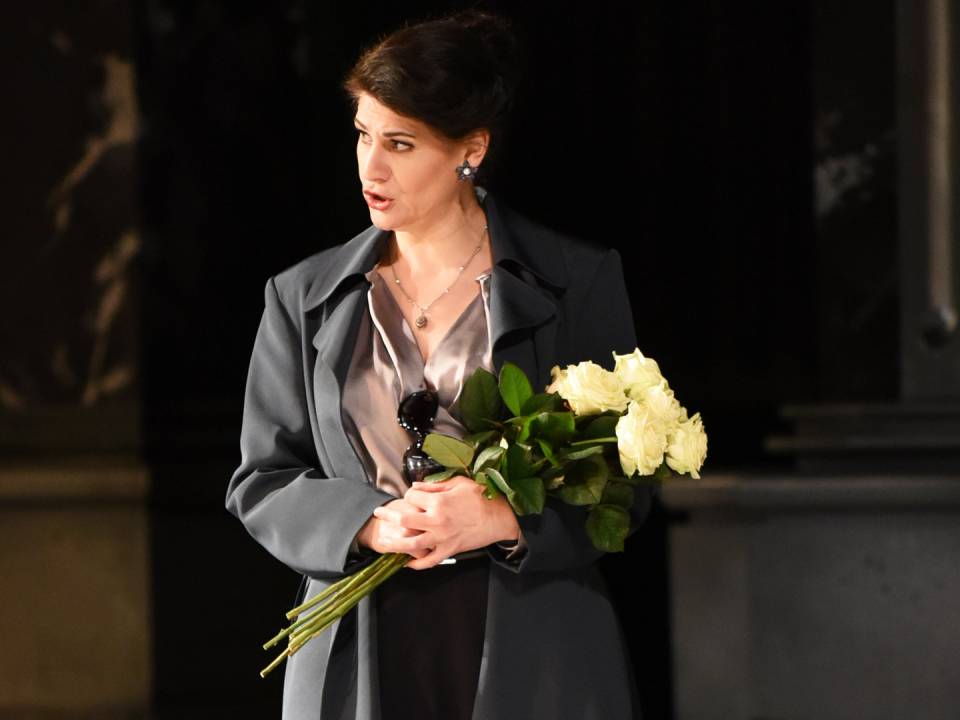 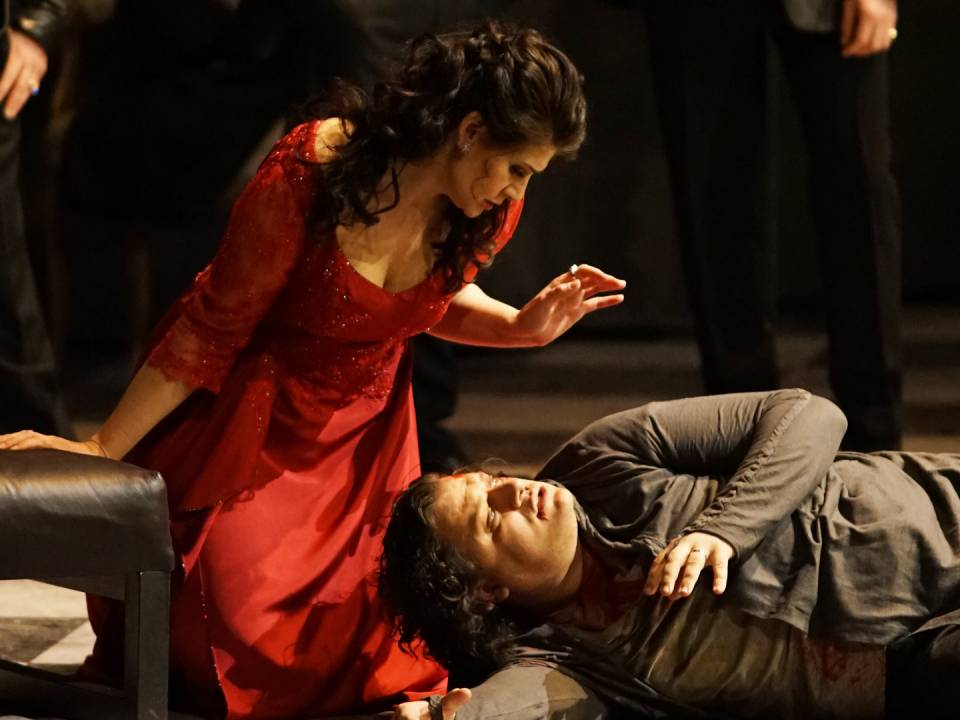 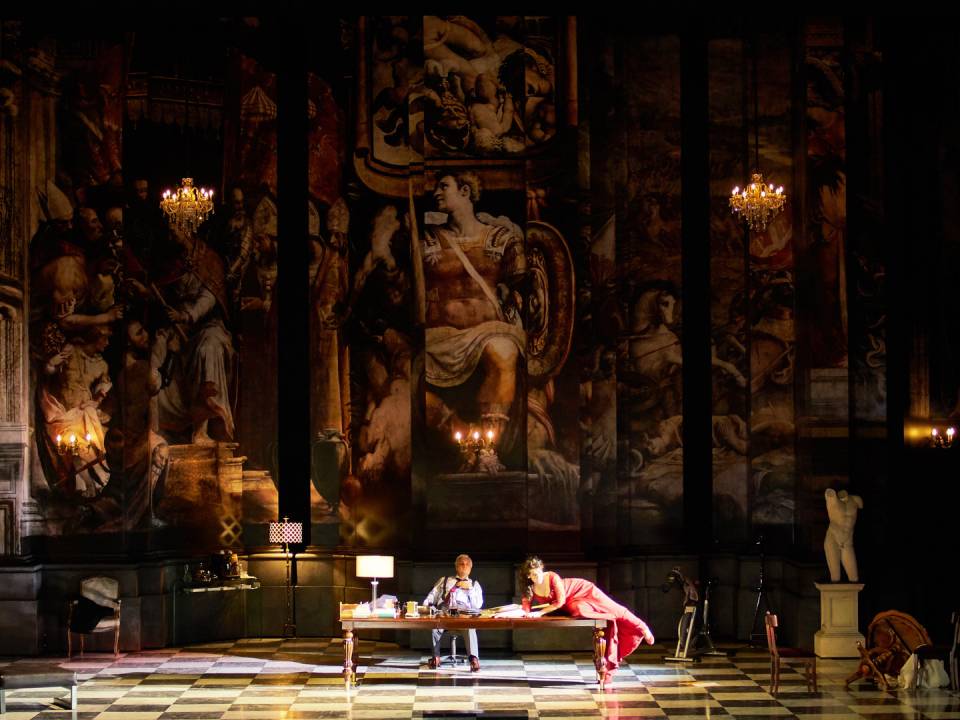 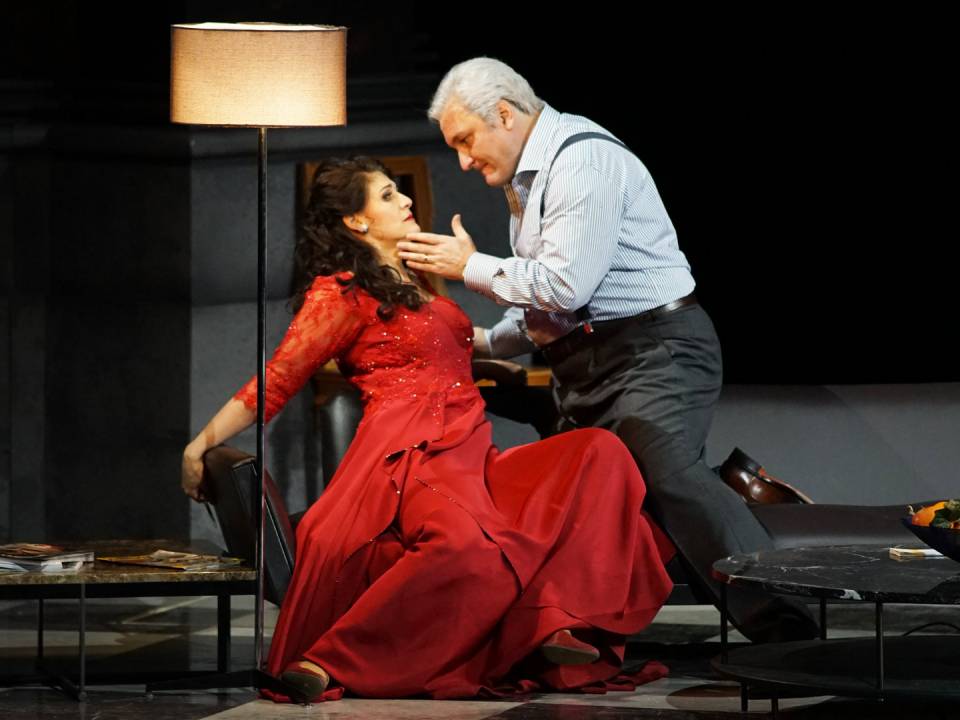 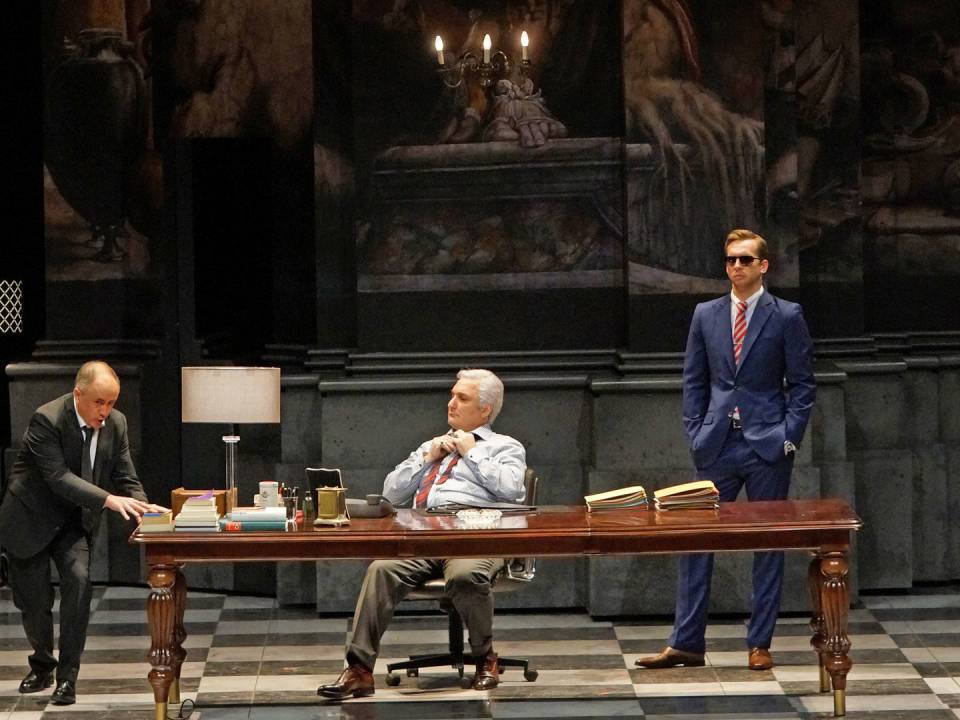 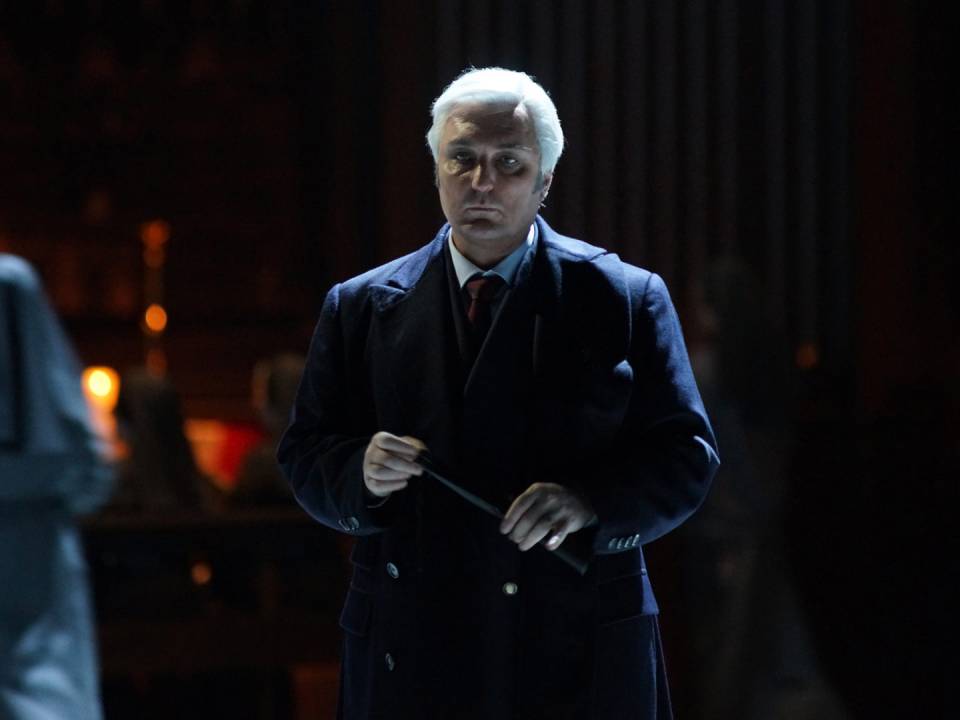 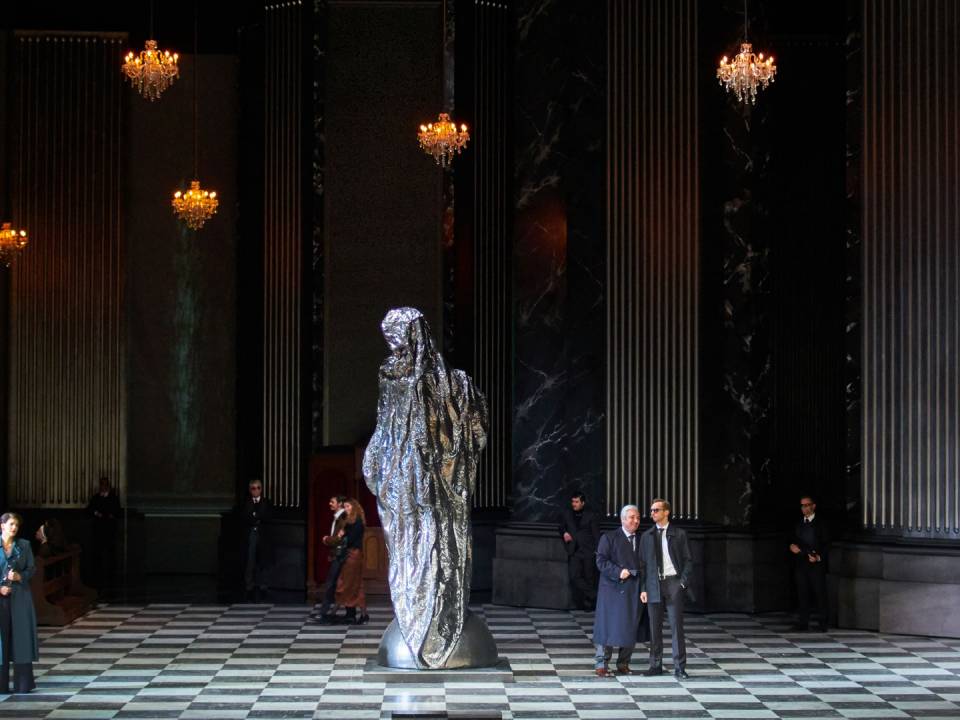